US vaping company ordered to pull electronic cigarettes from shelves 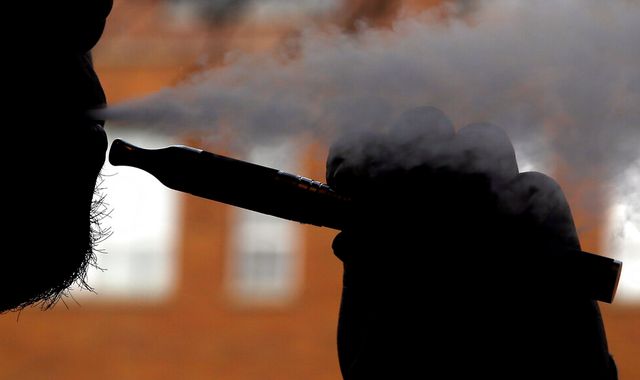 A vaping company has been blocked from selling e-cigarettes in the US after it was found to have played a "disproportionate role in the rise of youth vaping".

The ruling was made by the Food and Drug Administration (FDA) after the firm, Juul Labs Inc, submitted scientific and health data regarding its nicotine products for review.

The data, gathered over almost two years, showed a "lack of sufficient evidence" that Juul's products provided a net
benefit to public health.

FDA commissioner Robert Califf said in a statement: "We recognise these make up a significant part of the available products and many have played a disproportionate role in the rise in youth vaping."

The decision has been branded a potentially fatal blow for the San Francisco-based firm.

Teenage e-cigarette use accelerated as Juul began to gain popularity in 2017 and 2018, a US federal survey found.

However, the number dropped to 11.3% in 2021 according to the research, carried out for the US Centers for Disease Control and Prevention.

But the most recent data on youth e-cigarette use cannot be compared to earlier years due to changes in how the survey was conducted during the COVID pandemic, researchers said.

Juul, together with other e-cigarette brands - including Blu, owned by Imperial Brands Plc, and British American Tobacco Plc's Vuse - were given a deadline of September 2020 to submit applications to the FDA.

The health agency then had to judge whether each product encouraged smokers to quit.

How much the product helped people stub out their habit was weighed against potential health damage to new e-cigarette users who had never smoked - including teenagers.

Read more:
Employees are bullied or fired for vaping at work, study finds
Cardiologists warn vaping is so dangerous and addictive it should be banned

Juul has not yet responded to requests for comment, but US reports suggest it is likely to appeal the decision.

E-cigarette makers have been selling products in the US for years without official FDA authorisation.

The FDA banned all flavours aside from tobacco and menthol for cartridge-based e-cigarettes, including those produced by Juul, in 2020.

Juul withdrew all other flavours, including mint and mango, after regulations were tightened and following an outcry from anti-smoking campaigners.

The FDA decision saw shares in Altria Group, which has a 35% stake in Juul, plunge by 9%.

The White House this week unveiled proposals for a rule on a maximum nicotine level in cigarettes and other tobacco products to make them less addictive.